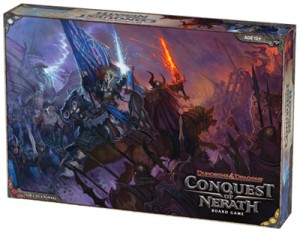 I’ve recently gotten the chance to play Wizard of the Coast’s board game Conquest of Nerath (by Wizards of the Coast) and really enjoyed my experience.  After playing a few games, the knee-jerk reaction of many of the players was that Dragons were the superior unit, even given their cost.  Let’s see what the math has to say.

For this, I’m going to calculate how many hits you get per gold spent on a given unit.  This will ignore many abilities that do not have a direct impact on a fight.  So when making a purchase choice, make sure to weigh those special abilities as well.

Footsoldier(1): d6 [.1667 hits per gold]
Siege Engine(2): d8, 2d8 on attack [.1875 hits per gold on defense, .375 hits per gold on offense]
Fighter(2): d10 [.25 hits per gold]
Wizard(3): d10, first strike [.1667 hits per gold]
Monster(4): d12 [.1458 hits per gold]
Dragon(5): d20 [.15 hits per gold]
Generally speaking, your most cost-efficient unit for attacking is by far the Siege Engine, while your most effective unit for defense is the Fighter.  The Monster is the least cost-efficient unit in terms of damage, however, it has one of the most powerful abilities.  None of these abilities affect the numbers, however, except the Siege Engine’s (which is already included) and the Wizard’s Strike First ability, which doesn’t affect their expected hits, just when they are applied.
To give a more concrete idea of what this math means, I’ll provide two examples of Footsoldiers against a Dragons.  This math assumes uses expected averages – which means that not every combat will go this way.
5 Footsoldiers vs 1 Dragon
Round 1:
Round 2:
Round 3:
30 Footsoldiers vs 6 Dragons
Round 1:
Round 2:
Round 3:

So, the Footsoldiers trounce the Dragons pretty handily in both small and large scale encounters.  Of course, the Dragons have mobility on their side, but they aren’t the auto-pick many players thought they were.