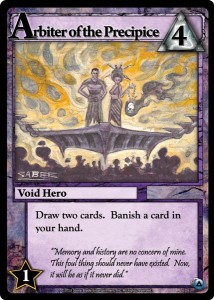 As with many card-drafting, competitive deck-building games, Ascension places a heavy focus on maximizing your resource efficiency on every turn. This week, I will analyze the card set and identify which are the most cost-efficient Ascension cards. Note I am limiting myself to the first cycle here (Chronicle of the Godslayer and Return of the Fallen.)

For each cost, I am only taking into account cards that cost runes – ie, Constructs and Heroes.  I’ll make an early-game pick (think about 1/3 of the game’s honor has been claimed or less) and a late-game pick (think that less 2/3 of the game’s honor remains to be claimed).  Why the uneven split?  Because as the game progresses, honor tends to be claimed at a much faster rate.

Early game: Void Initiate, hands down.  Banish is crucial, though new players often underestimate its value.  Until you remove your starting cards and other weak cards, banish is more valuable than card draw as banish effectively gives you a single card draw every time that bad card would have shown up at the low cost of discarding the bad card.  Hectic Scribe is okay here as it trades card quality for quantity, but I wouldn’t use it unless you can’t get any banish.

Late game: Arha Initiate.  There’s not really a contest, here.  Lifebound Initiate is okay, but if you’re relying on Lifebound synergy there are a lot better options.

Mechanca Initiate and Guardian of Sadranis are just bad.  There are a few (very few) niche uses for them, but usually you shouldn’t bother.

Early game: Temple Librarian.  A great card to sift through your deck, especially potent in the early game, especially before your banish has removed your starting cards.  Its power wanes significantly as the game nears its end, but you won’t regret having had it.

Late game: Seer of the Forked Path. One of my favorite underrated cards.  Being able to remove a card from the middle that you can’t otherwise acquire/defeat is crucial in hate-drafting power cards your opponents want to acquire/defeat.

Spike Vixen, Great Omen Raven and Battery Monk are all okay early-game, solid late-game picks that replace themselves (i.e. let you draw a card).  Deathseeker is obviously better than a Heavy Infantry, but should be ignored unless you can banish it right away or want the power.

Early game: Arha Sensei. This is an amazing early card that you try to banish as soon as all of your starting cards are gone.  Combining banish with instant, flexible resource gain makes this card gold early on.  Shadow Star is actually a really strong option here as well.  Getting one power every turn is often much more valuable than just getting two power one turn (such as from a Heavy Infantry or the Shade of the Black Watch).  In the early game, you’ll frequently find yourself wishing you had one more power on many turns, especially if you buy a Heavy Infantry or two.  Sure, it can be discarded if your opponents defeat the right monsters – but if you have the power, you’ll have the edge in defeating those monsters in the first place.

Late game: Wolf Shaman.  Cards that replace themselves are valuable, and a no-strings-attached rune is one of the best extras you’ll get with one of these cards.  Being a Lifebound Hero is just icing on the cake.

Runic Lycanthrope, Dimension Diver and Lunar Stag are all better than a Mystic, but their additional utility is only marginally useful.  Kor is too niche and unreliable especially when the Spike Vixen exists at a cost of 1 rune less.  Shade of the Black Watch is a popular favorite, but one that I frown on a bit, personally.  While 2 power and banish is nice, the 3 rune cost slot has a lot of competition and power decks can sometimes net extra banish from defeating monsters, making it less useful.  Burrower Mark II is one of the best cheap Constructs, but needs a deck built around it to work well.

Early game: Arbiter of the Precipice. A souped-up Temple Librarian that has you banish the undesired card instead is fantastic.  Ignore this in the late game unless you really need the banish.  Druids of the Stone Circle, however, I think is an awesome card in its own right, and heavily underrated.  Being able to snap up any 3-cost Hero of your choice (and there are a lot of quality ones) is worthwhile, but putting it on top of your deck is amazing.  Most players underestimate how incredibly valuable getting your cards early really is – don’t be one of them.

Late game: Rocket Courier. I’m making a strange call here with choosing a niche card, but hear me out.  Unless you’re cycling through your entire deck (and at that point you’ve probably one anyways), going through your deck at the end game is a sluggish process, even with banish and card draw.  Many games I end with 4-6 turns of acquisitions in my discard pile, and many of these are valuable Constructs, as it is not until later in the game that my income reaches the point where I can frequently acquire them.  Rocket Courier steps in and lets you put those Constructs (Link Device or Dimension Diver to get all flavors of Construct) into play immediately.  This card can win you games by itself.

There are a lot of cards you won’t regret buying at this level.  Askara of Fate and Arbiter of Fate are all solid in almost every deck.  Twofold Askara, Dandelion Witch, and Reactor Monk are great cards but only as a part of certain strategies.  Reclamax is either great or worthless (depending on if either constructs have been banished or you can do so). Demon Slayer is okay, and in distant last place is either Arha Templar, Avatar Golem or Dartha’s Retreat.

Honestly, I feel this tier isn’t nearly as good as the 4 rune cost tier, particularly considering how much harder it is to get 5 runes in a single turn.

Early game: Black Hole. Banish is crucial early-game, and this card gives it to you every turn – and a bonus power, just because.  You probably won’t use it after halfway through the game, but by then it has given you a huge deck-thinning advantage and still sits at a comfortable 4 honor value.  Snap Dragon is another good contender for its extra rune per turn.

Late game: Tablet of Time’s Dawn. Do I really need to explain why an extra turn is good?  Stone Circle is an underrated favorite of mine here as well.  See Rocket Courier above for why this is good, except replace “Construct” with “powerful Heroes”.

Watchmaker’s Altar and Void Thirster are kind of bad.  Combustion Idol is terribly niche, especially compared to the All-Seeing Eye which has no conditionals for +1 rune cost.  Ascetic is bland and while not having to lose a card to get two new ones is useful (see Temple Librarian) it’s not really 3 rune more useful.  Flytrap Witch is kind of worse than Dandelion Witch (as if you’re going to buy Lifebound Heroes you probably have a lot of them already) and Eternal Askara is just bad.  I’d rather have Seer of the Forked Path over the Eternal Askara and it costs 3 more than the Seer.  Finally, Black Watch Elite suffers from the same disadvantages of Shade of the Black Watch, but because of its cost the banish effect is even less useful.

For these higher-cost tiers, I’m only going to make one pick, as almost all of them will be acquired late-game as it is.

The All-Seeing Eye. One card, every turn, no questions asked.  Makes the Ascetic of the Lidless Eye look like a bad joke.  Nairi, the Henge Queen is a solid second place especially if you have a lot of banish/card draw.

The Grand Design nearly obsoletes Watchmaker’s Altar, but let’s be honest here – you need to get really lucky for it to pull its weight.  Socket Altar is better, but not by much.  Oziah gives rune-heavy decks a chance to defeat monsters, and you don’t really have a lot of monsters you can’t defeat.  But every time he defeats a cultist (and it will happen often) you will feel like a total chump (and that’s because you are).  Landtalker doesn’t really do enough to cost 6, unless you can purchase it very early.  By the late game you’re probably burning 1-3 rune a turn anyways.  Emri is in a similar boat, but at least he’s guaranteed to be useful.

Cetra, Weaver of Stars: Have I mentioned that getting cards early is awesome?  Yes?  Well let’s combine that with getting any Hero card free.  Throw in Great Omen Raven for a laugh.

Why not Master Dartha?  Because he requires the rest of your deck to be good (usually really good) to actually pull his weight.  I feel he’s often just a “win more” card.  Cetra can turn a game around for you in ways the Master could only dream of.

Hedron Link Device is rarely useful, and not all that impressive when it is.  I’d almost always rather have a Project Alpha if I’m Mechanca Construct heavy.  Unfortunately those decks usually require heavy rune investment, which means opponents will often destroy all your constructs by defeating monsters.  Muramasa is solid and reliable, but not worth it unless you’re stacking other power.  Sadranis is in a similar boat.  Very useful if you have the supplemental power, but most players won’t.

That concludes my analysis of the most cost-efficient Ascension cards.  Disagree?  Think I missed a card’s advantages, or value another too highly?  Let me know in the comments below.