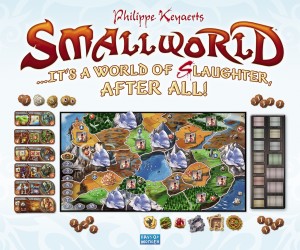 I’ve gotten to enjoy Small World by Days of Wonder recently and really appreciate the simple mechanics that still provided an engaging experience with plenty of strategic and tactical options.  Looking at the random combinations of powers and races got me curious as to what some of the best race and power combinations were in Small World.

For this article I’m just going to consider the core races and powers.  Feel free to comment if you’d like to see expansion races and powers done.   In Small World, there is very little randomness.  Players choose their starting locations, and there is no dice rolling or card flipping for combat.  Instead, you simply take areas if you have enough tokens.  Thus, most of the randomness is actually in the race/power combinations available.  Now, just as a refresher, there are 14 races and 20 powers, meaning that there are 280 combinations just in the base game alone.  Just like in most games, however, some combinations are better than others, and I’m here to look at some of the best race and power combinations.

This is just the beginning look.  I’ll be covering how good, offensively, each of the race/special power combinations are.  This is critical, as it determines how many gold coins you can get out the door with that combo.  However, it’s not the only factor – how well the race stands up in future turns is important as well, and more steady income can help you to avoid aggressive attention from the other players.

Now, of course, the large number of variables in every game prevent an actual maximum from being calculated.  So I’ll look at the problem with a few assumptions, and you’ll have to think (Imagine that, in a strategy game!) whether the current board position and associated factors make the race/power combination a weaker or stronger choice.  Those assumptions include a 4 player game (and thus the 4 player map), that each region has 1 token defending it or a mountain (thus all territories take 3 tokens to conquer), that are you bringing on the race fresh via first conquest rules and that you push for a final conquest via the reinforcement die, if applicable.  The tables below calculate the average gold you will get given these conditions.

A hyper-aggressive race with 6 tokens to start.  Their strongest powers are ones that take advantage of their likeliness to conquer extra territories.

A very limited race with 3 tokens, but one of the few with an ability that works in decline.

One of the best long-term races as it never actually loses a token (and starts with 6) but it is at the cost of any actual offensive benefit.

A strange race with 5 tokens where its only loss when going into decline is its special power, instead of the normal loss of tokens and ability to conquest new regions.

Straight-forward and to the point, just as expected with 6 race tokens.

A bit of a strange race, but if well-played their ability can make a flank unconquerable.  However, that ability is often simply inferior to Diplomat.

The average race with 5 tokens, getting a rather straight-forward coin bonus.

The traditional aggressive race with 5 tokens.

The definitive swarm race with 8 tokens base.

The race that replaces itself – playing the long game with 6 tokens to start, but it caps at 20.

Their strange conversion ability compensates for their 5 tokens quite well.  I’m going to assume they convert one active race per turn – note that race tokens in decline are not a valid target!

The only race to take advantage of the water, with 6 tokens to start.

They have one of the strongest defensive abilities, but are limited to only 5 tokens.

Very similar to Humans with five tokens and a bonus gold ability.

Now, of course, these tables don’t actually give the best Small World race and power combinations, but it does set up the discussion I want to have in the next post.  Remember, these tables are assuming that every territory is going to take 3 race tokens (before abilities and powers) to take.  Sometimes things will be harder, other times (more rarely) easier.  You must weigh how much harder or easier, as well as how many gold coins you will lose/gain by picking that race.

But that’s a conversation for next week.