Welcome to another Warhammer 40k battle report in Ricter’s series of tournament preparation for the Las Vegas Open! This week, I, General Mawr, will be playing Eldar against Ricter’s White Scars with Tau allies. Mission is drawn from Scenario 4 of the LVO and consists of a combination of Crusade and Emperor’s Will.

Having faced Ricter before I know what to expect and there are things in his list that are very hard for TAC lists to handle, namely the Broadside squad and the Centurion squad. These units are hard to take down since they are screened by the Chapter Master, the Librarian, or the Tau Commander. The amount of fire power they put out makes charging them suicide but with the Chapter Master’s saves they are very hard to shoot off the board.

That being said I plan to try to ignore the hard to kill units and focus on killing his troops to remove his scoring potential. I am going to try to get my Shining Spears in and charge the Broadside Squad, hopefully before it eats through my Wave Serpents. Ultimately the plan is to kill his troops and keep mine alive and hope to claim objectives late game. The Wraithblades are in the list to test them out. I do not expect them to perform all that well but I don’t like not having a decent CC unit.

I’m not quite sure what to expect against this Eldar list, after having played against Deathstars many weeks in a row now. Its power is very much distributed but the combined total firepower seems much more threatening than the Seer Council list. In particular, I notice that there are both AP 2/3 weapons and. more importantly, AP 3 blast weapons, looking to punish any clumping on my part. It also has a unit that I haven’t seen before, the Wraithblades, and even if the unit is not particularly good, I don’t want to fight a bunch of AP 2 attacks in assault.

Looking at the game with my list, I don’t really feel I have any pieces missing. I have plenty of grav/melta/bikes to take care of the Eldar skimmers, and the Centurions or Broadsides should put nice holes in any of his tougher units, like the Wraithblades or Shining Spears. However, I don’t expect my Thunderfire Cannon to do much this game – I’ll probably wreck the Wave Serpents, not explode them, and none of the Infantry are particularly vulnerable to the Thunderfire Cannon anyways, as they all with either be in cover or have better armor saves than my AP.

I botch the objective deployment pretty bad, putting one of the objective markers on the wrong side of the wall (closer to my opponent instead of me) because I got confused about which deployment zone I was in. Considering how important objectives are, this is something I need to make sure I handle correctly in the future. I also note that there’s really not a good spot for the Emperor’s Will objective in my deployment zone, so I just kind of throw it out there and hope it won’t matter. I do get Immovable Object for my Warlord trait and Hallucination on my Librarian, which seems promising.

Deployment just feels bad. Because of the terrain and Fire Prisms, I have to divide my units up in a way I don’t really like. Since the Eldar have first turn and there is no Night-fighting, I won’t have a cover save either. I consider clumping in the ruins anyways, because the Eldar would only really have one Fire Prism in LoS that would (hopefully) cause minimal damage. Instead, I spread out my units, putting my high-threats in the middle, a little spread out in hopes that the Eldar will shoot at them and bounce off the tanking characters. This also puts me in a very, very powerful seize position, as I can probably down both of the Eldar Fire Prisms on the first turn. 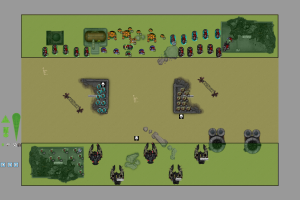 Ricter fails to seize the initiative and the game begins. 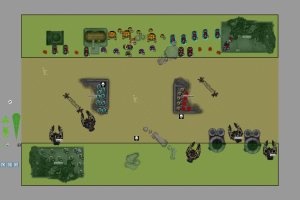 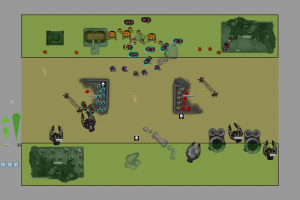 Broadside Squad remains stationary and wreck the right Fire Prism with their high-yield missile pods. Black and Teal Bike squads maneuver towards the right flank. Thunderfire Cannon attempts to fire indirectly at the Teal Ranger Squad but scatters killing a member of the Green Bike Squad. Although they are down a man the Green Bike Squad shoot their grav guns at the Fire Prism but do not manage to cause any damage; they are able to cause a glancing hit with their krak grenades on the charge. Centurion Squad move up. 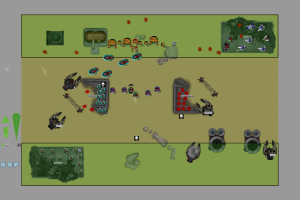 The Shining Spear Squad come in from reserves, outflanking on the right side of the board. The Broadside Squad intercepts them killing two. The Shining Spear Squad try to take out the Thunderfire Cannon before it finishes off the Teal Ranger Squad but to no avail. The Wraithblade’s Wave Serpent fires its twin-linked scatter laser, shuriken cannon, and serpent shield at the Kroot finishing off the squad. Teal Rangers and Green Dire Avenger’s Wave Serpent finish off the Green Bike Squad. Remaining Fire Prism fires a dispersed blast at the Broadside Squad and manages to clip a member of the Black Bike Squad. The Broadside Squad sustain no damage but the Black Biker is not so lucky. The remaining member of his squad flees off the board. Green Ranger Squad fires on the Centurion Squad but cause no wounds. 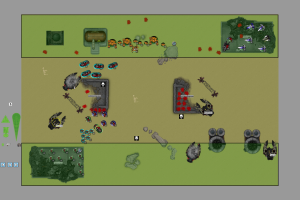 Teal Bike Squad moves in on the remaining Fire Prism and use their grav guns and krak grenades to wreck it. Thunderfire Cannon devoid of targets that don’t risk scattering onto his allies fires on the Shining Spear Squad causing no casualties. Centurions charge the exposed members of the Teal Ranger Squad killing three; the remaining Rangers flee. 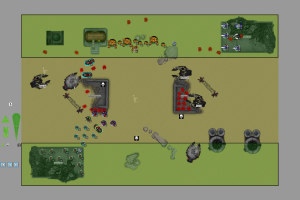 The Green Dire Avenger’s and the Wraithblades’ Wave Serpent move in and fire on the Teal Bike Squad killing three. Shining Spear Squad charges the Thunderfire Cannon and the Exarch kills the Tech Marine manning it with his Star Lance. Teal Ranger Squad regroups and both them and the Green Ranger Squad fires at the Centurions but fail to cause any wounds. 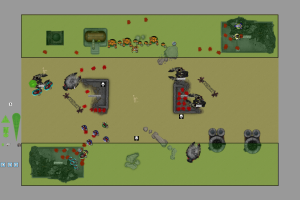 Teal Bike Squad immobilizes the Wave Green Dire Avengers’ Wave Serpent with their grav guns but are unable to wreck it in assualt. The Centurion squad shoots at the Green Ranger squad and then multi-assualts the both Ranger Squads. Both squadas fail their leadership. The Green Ranger Squad fails their moral check and flees off the board. The Teal Ranger squad only falls back. Broadside squad kills most of the remaining Shining Spear Squad. 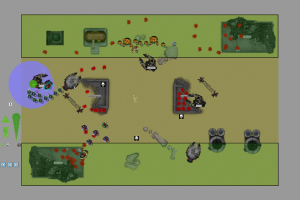 Both the Green Dire Avengers’ and Wraithblades’ Wave Serpent fire at the Broadside Squad killing one Broadside and wounding the Tau commander. Green Dire Avenger Squad disembarks from their immobilized transport and fires at the Teal Bike Squad killing one. Autarch and Shining Spear Exarch charge the Broadside Squad and are obliterated by their massed fire. Teal Ranger Squad fails to regroup and flees off the board. 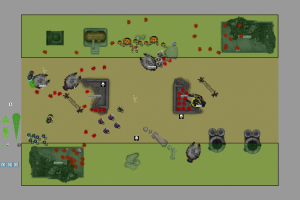 Remaining Teal biker uses his grav gun to wreck the Green Dire Avengers’ Wave Serpent. Chapter Master splits from the Centurion Squad and charges the Green Dire Avenger Squad, killing three. The Chapter Master is unable to overrun them as they flee. Broadside Squad wrecks the Wraithblades Wave Serpent. As the Wraithbladess disembark three are gunned down by the Centurions. 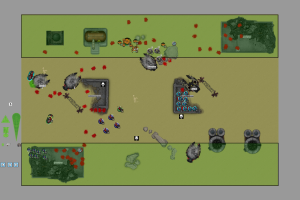 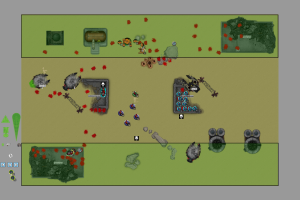 This game went pretty much as I expected. I was able to kill Ricter’s troops fairly easily, partly due to his aggressive deployment, but was not really able to dent his tougher squads. The Wraithblades proved about as useful as I expected; playing Orks most of the time has made me take for granted how nice it is to have open-topped assault vehicles.

I forgot that his Warlord was scoring; if he hadn’t been and if I could have managed to kill that last Teal Biker I may have won. That is a lot of ifs. If Ricter’s warlord had not been scoring I think he would have been more conservative with his troops. I was very happy with the performance of the Fire Prisms but wish there was a way for them to ignore cover.

Well, that was a lot messier than I had hoped. The Eldar basically played my normal tactic – use LoS and range to avoid fighting many units out of the opposing army. Unfortunately for the Eldar, that only works for so long, and they didn’t have the units left to handle my Broadsides and Centurions by the time they tried to kill them.

Space Marine List Thoughts
The Chapter Master performed well enough. Since the Eldar basically ignored my tougher units in the beginning, he did a lot less tanking than he normally does. Still, he basically mulched a Dire Avenger unit on his own and was scoring. The Tau Commander was clutch, as always. Realistically, he was basically just there to give Ignores Cover to the Broadsides and Twin-Linked to the Drones, but this made a huge difference against the Fire Prisms / Wave Serpents and their cover saves. The Librarian… still not very useful. I’m just not seeing Telepathy as being that good. I even got one of the star powers this game, but between range, LoS, and lack of targets it never really did anything. Basically, by the time he got in range of a unit, it was already in range of the Centurions and Chapter Master, which meant the unit was already dead or at least not a threat.

My bikes got beat up pretty bad because of my poor deployment and awful cover saves, but still managed to hang in there (barely). The poor Kroot got butchered. I was thinking about Outflanking them, and I really should have. By the time the Eldar went after them I didn’t have any units I could support them with, and I ended up just throwing them away.

The Thunderfire Cannon… well, I’m pretty sure it managed to kill more points of my guys than my opponent’s. The one turn it had a good target it got a pretty awful scatter, and the rest of the game it spent missing or only causing a few wounds that were saved anyways. The Broadsides, however, were rock solid as usual, bringing down several Eldar Skimmers and basically wiping the entire Shining Spears unit with Autarch single-handedly. The Centurions spent most of the game trying to chase after the cowardly Eldar (I really wish I could afford faster movement for them), but still managed to kill two Ranger squads, a skimmer and most of the Wraithblades.

Eldar List Thoughts
The Wraithblades seemed pretty useless, which is basically the case for any assault unit that doesn’t get an open-topped or assault transport. The Shining Spears, while only killing the Thunderfire cannon, did take two full turns of Broadside firing to bring down, letting the Wave Serpents survive that much longer. The Rangers did a surprising amount of damage, between always wounding on a 4+ and Rending. The Wave Serpents and Dire Avengers I have seen before, and performed pretty much as I expected.

Thanks for reading. Feel free to add your comments!