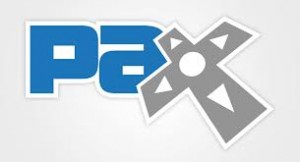 Between PAX and personal life I’ve been very busy lately, so I’ll share my thoughts on PAX. Here is my personal PAX Prime 2013 review.

Let’s start with the big one – Titanfall. If you haven’t heard of it, get out from underneath your rock and Google it. Even though 24 consoles ran this game continually for the entirety of the convention, it had the longest lines by far. It was easily the most played/desired game at the convention – an honor Titanfall deserved.

It combined the best elements of Call of Duty, the wildest dreams of Brink, and giant fucking death robots all into one beautiful package. It handled most of my complaints about the CoD franchise (shitty respawn system, not enough meaningful choices, no real encouragement to work as a team, etc) and fixed each one beautifully. Different gun types have drastically different playstyles (smart pistol, for example); you spawn with teammates instead of in some random shithole, and teamwork is greatly rewarded. It brought every good idea Brink had and wrapped them up into an amazing package (that actually worked) – each pilot can double-jump and run along walls, greatly expanding each map vertically and vastly adding to tactical options. And the titans. I was terrified that these were going to be overpowered, but they’re much more like the heavies are in Team Fortress 2. Terrifying if supported properly, but slow and easy targets if they try to be Johnny Lone Wolf. Perfect. I’d buy the game off the shelf, in its current condition. I can’t wait to see how much polish they’ll put on it between now and next year. To be blunt, I was leaning towards the PS4 but this game probably just made my choice for me.

It contains all the standard features you know and love with a vastly improved graphic experience. Basically reminds me of a less impressive version of Pokemon Stadium, but now on your handheld and playable through the entire experience. Mega evolutions are okay, not bad but not great. Their demo was kind of disappointing: not a lot of content to explore, considering the game’s impending release date. Then again, I can understand they don’t want to let players have access to the full game.

Gearbox is adding a ton of new content to BL2 as well as doing a massive reboot of the Homeworld franchise. Rereleases of 1-2, with HD versions, and they’re financing some spirtual indy successor which seems pretty popular.

It’s single player mode is pretty much what you’d expect. Nothing really shiny and new in combat, but a rich story and lots of meaningful choices.

Natural Selection’s 2 new expansion was a blast to play. I only got to play it for a little bit and hadn’t played the series before, but it seems pretty awesome. I’m definitely planning on getting it now.

Plants vs Zombies is now releasing a shooter… called Garden Warfare. Despite my skepticism, this actually seems pretty interesting. It’s basically TF2 with tons of class/weapon/ability choices as zombies.

Golem Arcana is a slick new title for board/minis gamers. It combines the traditional board game experience with digital tools, either a tablet or smart phone. All the book-keeping, rules, etc is kept track of by the technology. It works really smooth despite being a prototype. The game can either be played entirely analog or digital, but honestly the combined experience is the coolest. Also, it can generate an augmented reality image through the screen on the tablet, which is even more awesome than it sounds.

I noticed that Microsoft had a drastically bigger and more impressive presence than Sony did. I’m wondering if Sony is just hoping to ride the “We’re not Microsoft” wave all the way through launch. The “hardcore” gamers seemed to still be hating on Microsoft, but Microsoft’s games were all packed and more heavily populated than Sony’s by far. I think a lot of the knowledgeable, “in-the-loop” gamers are overestimating how important the internet whining over Xbox’s marketing failures will affect their sales negatively in the end if PAX is any indication.

Apparently World of Tanks is a big deal, too. It even had a bigger showing than PS4, and I didn’t even realize anyone played World of Tanks.

PAX was a great experience for me, but that was almost entirely in spite of PAX’s management. I’ve been to four different cons (most several times) and PAX was by far the worst in terms of organization and management. Their pass-buying system is a clusterfuck, they don’t manage lines nearly as well as they could, most of their activities (tabletop gaming in particular) could use a serious space upgrade, and they simply don’t have enough to do. They seem to rely on people sitting in line because they don’t have enough content to occupy everyone at the same time. Everything always had a line it seemed. The enforcers were really awesome, however. It was a great experience, despite how poorly organized it was overall.